Skip to content
It’s been a busy time for London’s circus-goers, with CircusFest half-way through it’s 5-week journey of circus at the Roundhouse and Jacksons Lane, as well as other London venues such as Shoreditch Town Hall. Obviously the highlight has to be Circus Geeks’ Beta Testing, which will be in the Roundhouse’s studio next Tuesday to Saturday, but I thought I’d give a round-up of the other shows in the festival.
The opening show, La Meute, featured a pack of young french acrobats, who were as comedic as they were skilled in their towel-robed show. It was fun, skilful and accessible. However, a week on from the show, it’s one which hasn’t much stuck with me, save for the one-armed handstand, performed on another acrobat’s face.

Clowns & Queens by Gandini Juggling asked for a “brave audience for a brave show.” As such a warning came prior to the show, the cruelty, humiliation and nudity which it held was not as shocking as it otherwise could have been, allowing us to enjoy many remarkable pieces of juggling, some stunning performances (Christelle Herrscher in particular) and the glory of it’s setting in Shoreditch Town Hall. The scene which has stuck with me mosts is one in which all 9 performers juggle whilst lying down, slipping in and out of sync with each other in incredibly complex patterns, underscored by a monotonous ticking. The (unintentional) addition of the naked body of heavily pregnant Marianna De Sanctis brought a totally new dimension to the show since its premiere last January. 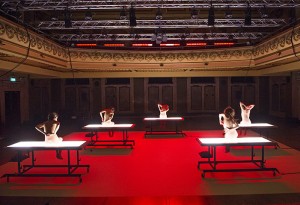 Capilotractes (the hair-hanging show) was wonderfully bizarre and warm-hearted show, in the Roundhouse’s intimate circus tent. It’s a true one-off and I felt very privileged to have seen it. You won’t get much out of them about the show in advance, so I shan’t spoil it in case you are yet to see it- but you can see some of their preparations here:
Silver Lining is a young company made up of students and recent graduates of the National Centre. Between the seven performers, they have a remarkable skills set- they sing, play live music, and perform a number of circus disciplines to an excellent level- and included my favourite juggler of the moment (outside Circus Geeks!), Tom Gaskin (see video below). The through line of the show is that they’re a group a friends, doing what they love to do. As such, it’s pretty inconsistent narratively in places, with some of the acts sticking out somewhat from the rest of the show; but essentially the energy is good, some of the numbers are great, and the company have a lot of support behind them. They will go far- so long as they can stick it out together, which is difficult at their time of life!
Sadly I will be missing Strike at Jacksons Lane, as they are showing at exactly the same times as Beta Testing, but hopefully I will get to see a dress-rehearsal. I’ve heard great things from Jacksons Lane from when the company were developing the show there back in September.